Effective leadership is an underlying theme throughout the teachings of the Dalai Lama. 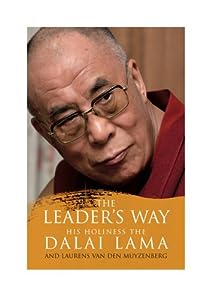 International managerial consultant Laurens van den Muyzenberg identified the business leadership undercurrent in the 1990s after he was hired to advise the Dalai Lama.

“Most of my clients do face difficult ethical problems,” says van den Muyzenberg, who consults leaders. “It’s hard to find somebody with the kind of ethical prestige that [the Dalai Lama] has.”

Professor  C.O. Herkströter, former CEO of Shell and Chairman of the Board of ING wrote this when reviewing the book.

“This book examines capitalism and Buddhism in a fascinating way. Everybody in business who is seriously interested in responsible entrepreneurship will recognise the issues. The book adds a valuable dimension to the values and ethical standards that form the basis for responsible leadership in business.”

The approach represents the synthesis of East and West and provides an inspiring manifesto for business change. The first part of The Leader’s Way two-part message is this: in order to lead, you must understand the reasons for our actions then you can act to  solve problems through integrity, respect and sensitivity toward others.

Recently the Dalai Lama spoke about compassion and global leadership.  He said good leaders today needed to be warm-hearted and practice open communication. With compassion, he believes we gain self-confidence and rid ourselves of our fears. “Then we can have honesty, then we can have trust.”

What does this mean for us in the work place?

If you look at the roots of the word compassion you begin to see how it can apply.  It meant to suffer with!  That has huge implications in the present economic climate doesn’t it?  It means to feel another’s pain.

What a burden that could be if we lead a large organisation.  Does that mean we have to feel the consequence of the every decision we make?  Well yes, I believe we do!  We need to be able to feel it and weigh it in the balance but it should not disable our ability to make hard decisions

A former colleague told me the following story.

“Some years ago I was invited to a funeral.  The person who had died had worked at quite a junior level in my division in a UK government department.  He had loved his job – his whole world had been centred on his work.

But he became ill.   In his role that put the safety of others at risk.  But there wasn’t any other work available for him to do!  It was the time of an earlier round of UK Government cuts. So I made the decision we couldn’t keep him on

He was devastated.  It is probably fair to say he lost the will to live.

I went to his funeral but it was one of the most difficult things I’ve ever done.  I didn’t know what to expect!  But his family were just delighted that a senior manager from the Department had come along.

Did I regret my decision?  No!  Was I pained by that decision?  Yes, deeply!  But then no one said being a senior manager or a leader was always going to be easy.”

The person who told me that story was a well loved, trusted and very effective leader.

Tenzin Gayatso could be the last Dalai Lama, but his message is timeless.

Wendy Mason works as a consultant, business coach and blogger. Adept at problem solving, she is a great person to bring in when that one thing you thought was straightforward turns out not to be! If you have a problem talk to Wendy – she can help you – email her atwendymason@wisewolfconsulting.com or ring ++44(0)7867681439

We use cookies to ensure that we give you the best experience on our website. If you continue to use this site we will assume that you are happy with it.Ok